Day seven started with a bus ride through the modern city of Jerusalem. We made our way past the Israeli Parliament (the Knesset) to the Israeli Museum. Here is located an art museum, sculpture garden, a biblical and archaeological museum, the Holy Land model, and the Shrine of the Book. We visited the two latter sites. The Holy Land model is a 1:50 scale model of Herod the Great's city of Jerusalem at the time of Christ.

After our tour of the model, we proceeded up the hill to the Shrine of the Book. Unfortunately photography is not allowed inside, so we have no pictures for you to see. However, this place is significant because it houses articles from the Dead Sea Scroll find at Qumran and copies of the scrolls. In the center of the Shrine is a large round display that houses a copy of a scroll of the entire book of Isaiah. The Dead Sea Scrolls are important for many reasons, but perhaps the two greatest are the impact on our knowledge of the Old Testament and our understanding of the Essenes (a sect of Jewish scribes who had a profound impact on early Christianity). Prior to their discovery, we only had manuscripts that dated to the tenth century A.D. The Dead Sea Scroll date back as early as 150 B.C.

Following a look through the Shrine of the Book, we again boarded our bus and journeyed back to the Old City to begin our trek up the famous Via Dolorosa (Way of Sorrows). We began at St. Stephen's Gate, also called the Lions' Gate. This is the place believed to be the site of the stoning of the first Christian martyr,  Stephen.  As a young rabbi named Saul stood by and watched (Acts 7:58-8:2), Stephen testified to Christ as he gave his life as a witness to the risen Savior.

Once inside the walls of the city, we quickly came to the Pool of Bethesda. The story is told (John 5:1-19) of a time when Jesus came by these pools and healed a man who had been lame for 38 years. The legend among many Jews was that periodically an angel would come and stir the waters and whoever would get into the pool first would be healed. Yet Jesus taught this man to trust in Him rather than legends of men. 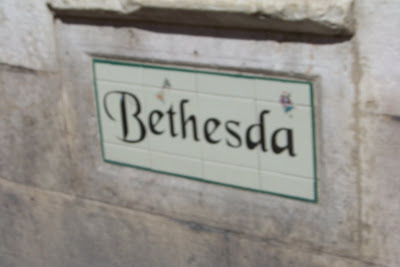 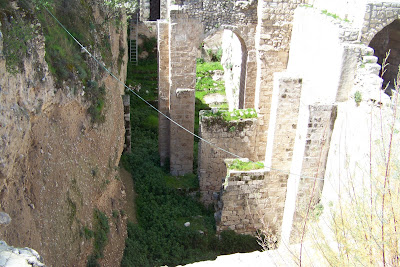 Next, we turned into the Church of St. Anne for a moment of reflection and worship. This stone church, built by the Crusaders, has vaulted ceilings that reverberate the sound of your voices and you sing. We enjoyed lifting our voices and hearing the praises echo toward our God in heaven.

After leaving the church we proceeded up the streets of the Old City past children playing and vendors selling wares to the passers-by. We turned into the Convent of the Sisters of Zion. This is believed to the place where the Fortress of Antonio stood (also known as the Praetorium), which was built by Herod the Great to honor his good friend, Mark Anthony. Once inside the convent we descended down stairs to a level ten feet below the present streets of Jerusalem. The excavations of the city have uncovered the very pavement referred to in John 19:13-17. It was here that Pilate questioned Jesus and unlawfully tried Him. Then, the Roman soldiers taunted and scourged him before Pilate pronounced sentence at his judgment seat. We held a brief service here and read the scriptures related to the events. I have rarely felt the presence of the Holy Spirit so heavy in a place as here. It was as if you could see the events happening before you. It was on these very stones that Jesus took up our cross and went out to die for our sins....Hallelujah, what a Savior! 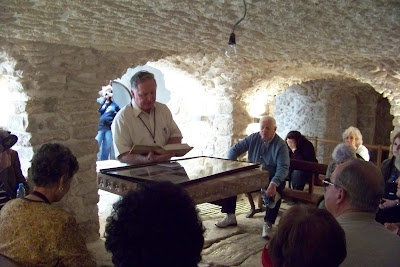 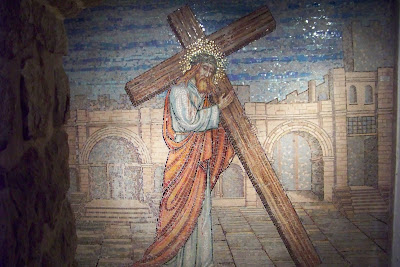 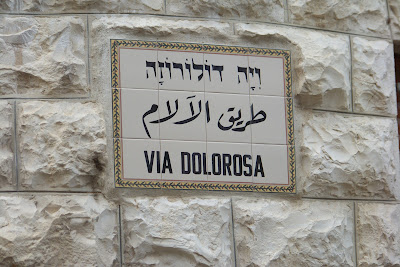 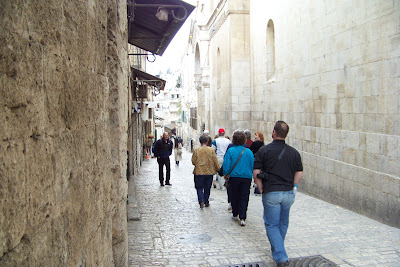 After we followed the path for a long journey, we came to the final five stations located under the roof of a massive church built over what is believed to be the sacred spot of the crucifixion. The Church of the Holy Sepulchre, was started by Emperor Constantine in A.D. 335, after his mother Queen Helena identified the spot. One tradition says that she had a dream revealing the spot. Other tradition said that when Hadrian rebuilt Jerusalem, he found Christians worshiping here and he erected a temple to Venus here to try to deter them from coming to this place. Helena is reported to have known this and led excavations at the site of the Venus temple and found a cave under the rubble containing the three crosses and even some nails. This is of course tradition and may or may not be true. The point however is that this church is probably near, if not at, the site of the crucifixion. 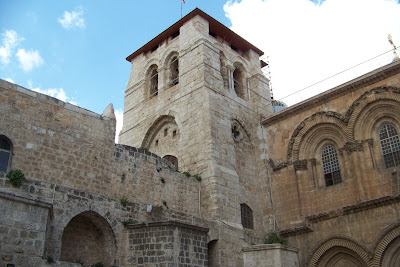 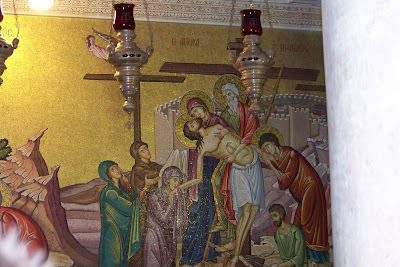 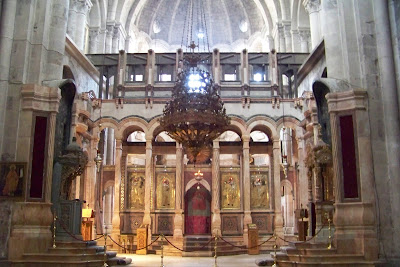 After visiting the Church of the Holy Sepulchre, we took a break for lunch in the markets around the Via Dolorosa. Then, upon resuming our walk, we found ourselves arriving back near the Temple mount complex. At the southwestern corner of the Temple complex is a portion of the wall from Herod's day. For centuries Jewish pilgrims have stood at this wall, mourning the destruction of the Temple and chanting the lamentations of Jeremiah as they pray for the rebuilding of a new Temple. For this reason, this wall is called the 'Wailing Wall' or more commonly the Western Wall. Letters and notes of prayers are often inserted in the cracks and crevices of the huge stones. Periodically the rabbis will come through and collect the prayers and take them to be buried. This is a sacred place for Jews today. There is fence separating the men and the women. Men must also cover their head with a hat, kippah (also called yarmulke), or prayer shawl in the prayer area. 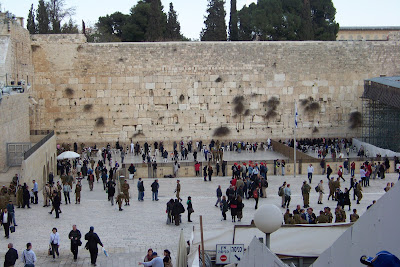 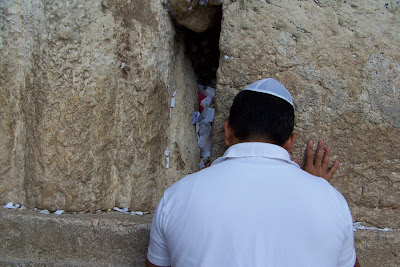 Our final stop for the busy day was a trip to the Davidson Museum just down from the Western Wall. We took a brief look inside and viewed a film about the archaeological work that has gone on for years in this holy city. From here we got a good view of the El Aksa Muslim Mosque located above us on the Temple mount. We also could see Robinson's Arch which was the most impressive ramp onto the Temple mount in Jesus' day. We finished our day in a most awesome place, the southern steps of the Temple area. Here are the remains of the double and triple gates (the main entrances into the Temple complex). We sat on the very original stones uncovered from the time of Christ. On these stones Peter and John healed a lame man (Acts 3). These stones Jesus would have walked up into the Temple. An incredible day....Hallelujah, what a Savior! 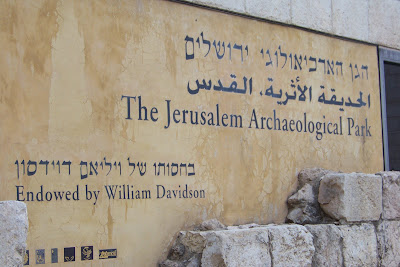 I walked today where Jesus walked,
In days of long ago.
I wandered down each path He knew,
With reverent step and slow.

Those little lanes, they have not changed,
A sweet peace fills the air.
I walked today where Jesus walked,
And felt Him close to me.
Posted by Jana Endris at 4:16 PM