After returning from the trip of a lifetime, I have been trying to decide how to document this adventure.  I think I will do a post capturing each day so..... bear with me because that will be about 10 posts!

Matt and I were given the opportunity to host a group on a trip to Israel...the Holy Land!  Never in a million years would I have thought that we would get to make this trip this early in our lives.  For whatever reason, when I think about people going to the Holy Land I imagine the older generation (and for the most part that is what we saw.)  One of Matt's seminary professors, Dr. Bill Tolar, came to Fairview last year and taught the Winter Bible Study in 2010.  On the last night he encouraged our church folks to consider a trip to the Holy Land.  He teams up with Dehoney Travel and lectures groups in the Holy Land several times a year.  He loves to see his former students have the Bible come to life in the Holy Land (the trip would not have been the same without him.)  He is 83 years old and says he won't retire as long as he can continue to take these young people to Israel.  With Dehoney Travel, the pastor goes for free with the first 5 people to sign up and the pastor's wife (that's me!) goes for free with the next 5 people.  Guess what??  We took 15 people with us therefore Matt and I were able to go for next to nothing!!  What a blessing!

We left Shreveport, La. on March 7th and had layovers in Houston and New Jersey before embarking on a VERY long flight (10+ hours) to Tel Aviv.

It was nearly impossible to sleep on the crowded flight due to our excitement and anxiousness.  Upon landing in Tel Aviv, we were greeted by a Dehoney representative and transferred to Gai Beach Hotel in Tiberias. 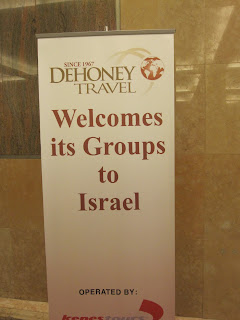 After a delicious meal, we went to bed anticipating the adventures that were ahead....

**As quoted from Jim Binns ( a fellow pilgrim on our trip)