After a decent night's rest (thanks to Ambien), we were eager to start our first day of touring!  Thankfully we had been instructed to bring a warm, all-weather coat because the forecast showed rain for the next three days with a chance of snow in the higher elevations!  The weather man was right but we didn't let the wet and cold stop us.

We began our day with a visit to the Mount of Beatitudes where Matt read the Beatitudes from the Sermon on the Mount found in Matthew 5. 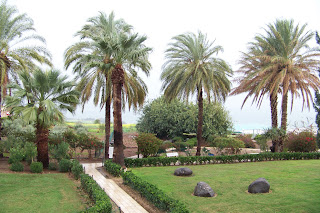 We then traveled North to the foothills of Mount Hermon and Caesarea Philippi where Jesus asked His disciples, "Who do men say that I, the Son of Man, am?"  as recorded in Matthew 16:13.  Peter responds in verse 16, "You're the Christ, the Son of the Living God!"  And Jesus responds, "Right, you are Peter!  And on this rock I will build my church and the gates of hell shall not prevail against it!"  As we stood before this awesome rock, we got the full impact of what Jesus was saying. Jesus used this rock as an illustration of the solid foundation of faith in Peter's confession of Him as Christ, that stood against the pagan idols in the niches scattered all around in the hillside.
Continuing to head North into the Golan Heights we stopped at a park overlooking the United Nations checkpoint leading into Syria.  It was at this point that it was VERY cold and snowing. 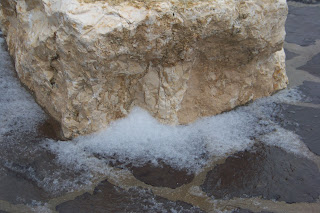 After a brief picture stop, we began descending the mountain to a small Kibbutz (a Jewish community) called Ein Gev to eat St. Peter's Fish at a restaurant situated on the Eastern shore of the Sea of Galilee.  It is called St. Peter's fish because of a marked pouch under the mouth and refers to the fish with a coin in its mouth that Peter caught.  (Matthew 17:27)

Our fourth stop of the day was on the Northern shore of the Sea of Galilee at Capernaum, Jesus' hometown during his ministry (Matthew 9:1).  Capernaum was the operational center for the larger part of the Galilean ministry of our Lord. Here he performed many healing miracles:  the Roman centurion's servant (Matthew 8:5-13), one sick of the palsy, one sick of an unclean spirit, and Peter's mother-in-law healed of a fever (Matthew 8:14-15).  Jesus called Matthew to "Follow Me" (Matthew 9:9) in this town as well as a few other disciples (Matthew 4:18-20).
We saw many excavations in this town.  We stood in a synagogue (the White Synagogue-built with white limestone) that was built on top of the very synagogue (built with black basalt) where Jesus had taught.  We also saw an extensive excavation of first century houses as well as what is believed to be the house of Simon Peter where some early Christians met to worship after Christ's ascension. 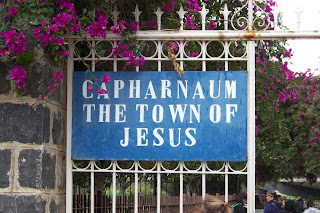 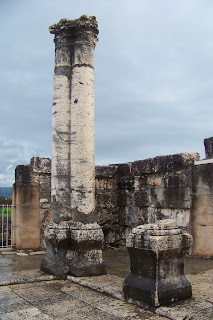 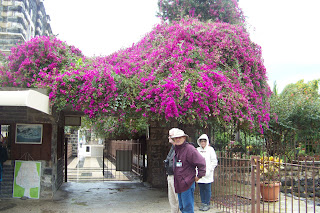 We left Capernaum and traveled to Tabgha, another town on the shores of the Sea of Galilee.  Since Byzantine times this has been identified as the site where the miracle of the multiplication of the loaves and fishes and the feeding of the five thousand took place (Matthew 14: 14-21).  A beautiful mosaic of two fish flanking a basket of loaves commemorates the biblical event inside a church built in 1982 on the foundations of the early church. 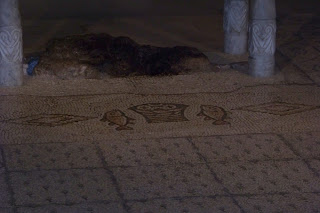 We drove past Magdala, home of Mary Magdalene, and stopped at the Kibbutz Ginosar to see the 1st century "Jesus Boat."  This boat from the New Testament period was discovered along the muddy shores of the Sea of Galilee during a drought in 1986.  It was in a boat such as this that Jesus and His disciples crossed the Sea, faced the storms, and fished, and from which Jesus taught the crowd that gathered on the seashore.  The highlight of the day for me was when we boarded a modern day boat and headed to the middle of the Sea during a rain storm.  In the middle of the sea they shut the engine down and we read of Jesus calming the storm in Matthew 8:23-27.  We sensed a moment of Peace as the rain stopped and a double rainbow appeared!  Jesus was surely with us!  I cry just thinking about that awesome moment.  As we rode back to shore, the song Worthy is the Lamb played and we worshiped the One True God! 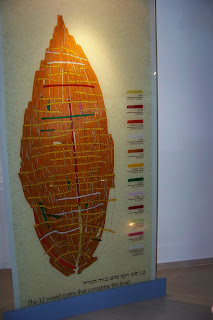 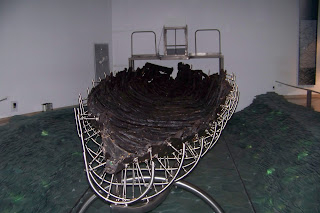 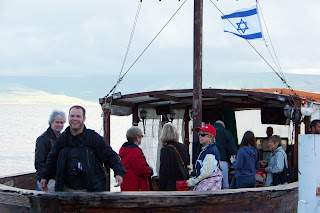 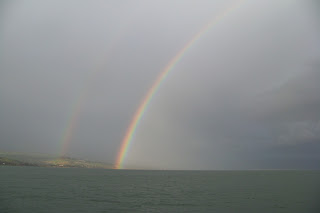 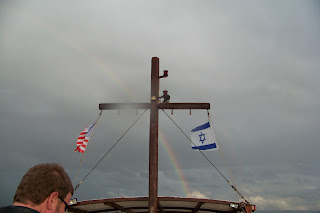 I've got chills reliving these moments!!
I LOVE YOU, JESUS!
Stay tuned for the rest of the story...
Posted by Jana Endris at 1:37 PM